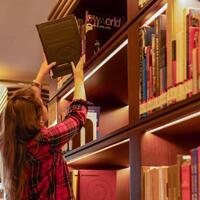 The most borrowed children’s books in libraries in Turkey: report

As Turkey celebrates the 58th Library Week, a report based on readership statistics released by an organization reveals data on the books Turks liked the most last year.

“My Sweet Orange Tree” by Brazilian novelist Jose Mauro de Vasconcelos tops the list created by the Turkish Librarians Association (TKD) by compiling data collected from public and university libraries in the country.

Continued the list of classics such as “Çalışkuşu”, a famous novel by Turkish writer Reşat Nuri Güntekin and “Madonna in a Fur Coat” and “Yusuf From Kuyucak” by Sabahattin Ali, a world famous Turkish novelist killed while he was fleeing the country. in 1948.

The data confirmed that most children borrow books from libraries across the country.

The association has also decided to award the “Most Successful Library” of the Year award to the provincial public library of Batman, located in south-eastern Turkey, for its contribution to the formation of the culture of libraries.

Meanwhile, the book-reading event, which started in 2012 and has become a traditional part of the week, will be implemented for the 11th time this year in different city squares.

The “We Read Books in 81 Cities” event will be held at noon tomorrow only in permitted provinces due to pandemic conditions.

7 ways companies can win back women

Get refunds on student loan repayments