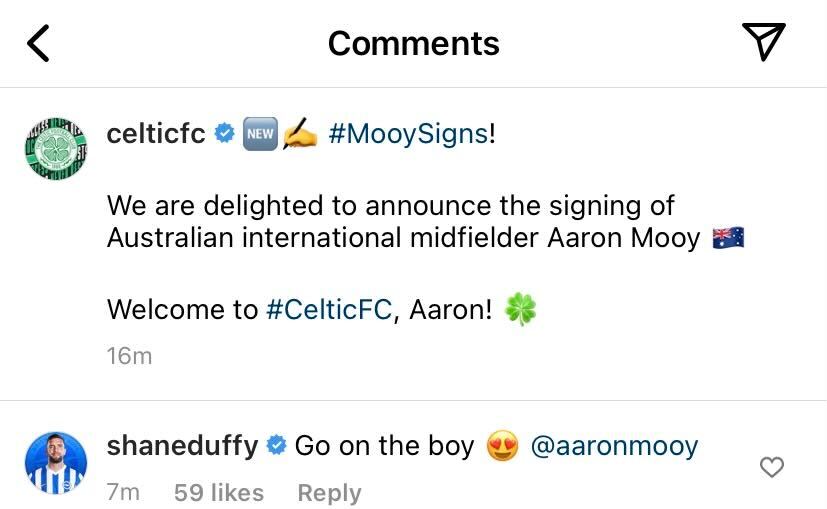 Having already secured deals for Jota, Cameron Carter-Vickers, Benjamin Siegrist and Alexandro Bernabei – as well as a permanent move for Daizen Maeda – the Hoops moved quickly to bring Mooy and Jenz to the club.

Mooy, 31, is an experienced midfielder renowned for his range of passing. With over 300 appearances for senior clubs in England, Scotland, China and Australia, he is likely to be seen as a replacement for Nir Bitton.

Meanwhile, former Fulham academy product Jenz joins Celtic as a possible replacement for Chris Jullien. The colossal 23-year-old has impressed at the highest level of French football and initially joins Celtic on loan with an option to buy.

Responding to the addition of 53-time Australia international Mooy, Duffy posted a four-word comment on Celtic’s confirmation on Instagram. The duo spent a season together at Brighton, during the 2019-20 campaign.

Duffy reaction: Celtic have announced the signing of Mooy

Ange Postecoglou’s most important job in the transfer window this summer was guarding Carter-Vickers and Jota. They probably cost the club much more than £10million.

Bernabei solve the left-back problem but at a cost of £4million. Maeda was worth just over £1million. Over £15million has been spent. So the Hoops had to add depth by bringing players from elsewhere on the cheap.

Landing an impressive talent in Jenz on loan with a future option to buy is good business, especially if Jullien is sold. Meanwhile, adding Mooy’s experience in midfield is a brilliant move, with Bitton leaving.